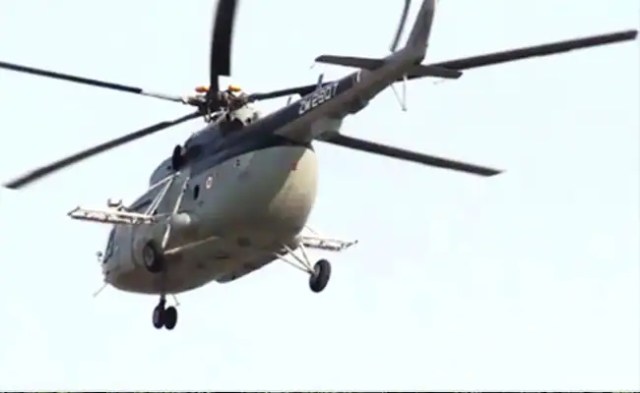 The system is being supplied for deployment within the locust management operation.

The Indian Air Power has indigenously modified two Mi-17 helicopters for atomised airborne spraying of pesticide to cope with locust assault, in keeping with a press release issued by the IAF on Tuesday.

Utilizing all indigenous parts, the atomised airborne spraying of pesticide has been efficiently achieved in air by means of a configuration of nozzles mounted each side on exterior trusses of a Mi-17 helicopters, the assertion added.

The nozzles used for the aim are a mixture of commercially accessible in addition to those developed by the Central Scientific Devices Organisation (CSIO), Chandigarh.

The pesticide malathion in acceptable focus can be stuffed within the inside auxiliary tank of 800 litres capability fitted contained in the helicopter and pumped into the nozzles through the use of {an electrical} pump in addition to compressed air, attaining practically 40 minutes of spaying length within the contaminated zone masking an space of roughly 750 hectares in every mission.

A staff of check pilots and check engineers of plane and Programs Testing Institution, Bangalore have efficiently carried out floor and airborne trials of Airborne Locust Management System (ALCS) on a modified Mi-17 helicopter.

The system is being supplied to be used with malathion for deployment within the locust management operation.

Initially, anticipating locust assault, the Ministry of Agriculture signed a contract with M/s Micron, UK to switch two Mi-17 Helicopters for spraying atomised pesticide to arrest locust breeding in Might.

Nonetheless, as a result of COVID-19 pandemic, the UK-based agency would be capable to manufacture and provide the modification package to the IAF solely from September onwards for system integration and testing, the assertion added.

In the meantime, an unprecedented locust assault began manifesting from Might final week and was quick spreading virtually throughout many states.

“In view of envisaged delay in provisioning of modification kits by M/s Micron, the Indian Air Power tasked No. three Base Restore Depot situated at Chandigarh to undertake the difficult activity of indigenously designing and creating an airborne Locust Management System (ALCS) for Mi-17 helicopters,” the assertion added.